2018 Aries Rows Garden subscriptions are now open! I'm thrilled that the series has stretched into a fifth year, and let's keep the party rolling. Head over to the 2018 Subscriptions page for more details and to subscribe.In addition, I'm very excited to be launching Aries Freestyle in 2018. I've been obsessed with writing stagger-stack themeless puzzles over the last few years, and I've gotten a lot of positive response from solvers that they want more. Ask and you shall receive! Though I want to explore other freestyle formats, most of these will be of the stagger-stack variety. In addition to the regular bi-weekly delivery of Aries Freestyle puzzles, there will be four bonus puzzles released throughout the year. These might be oversized, may feature a quasi-theme or a twist, or it may feature a guest contributor - stay tuned!More information on both services can be found on the 2018 Subscriptions page. Solvers can save money by bundling both services, or can subscribe to each service individually.Thanks to all who have supported this site since its inception in 2010. Here's to making 2018 a great year in puzzling!-Andrew
Posted by Andrew J. Ries at 12:01 AM No comments:

The End of an Era

After four years and over two hundred puzzles, it's with some sadness that I announce the end of Aries Xword at the conclusion of this year. The final puzzle in the series will be emailed on Saturday, December 30, 2017.

It's been quite an experience to write a weekly themed puzzle for the last four years. The schedule pushed me as a constructor, as I frequently went through stretches marked by a creative lull, and typically it was the weekly writing of the Aries Xword puzzle that helped me brute-force my way through those ruts. When the service launched at the start of 2014, I had amassed a good backlog of puzzles and on top of that a good backlog of theme ideas. Both of those backlogs were exhausted by about, say, June 2014, and since then each Aries Xword puzzle was generally completely conceived and executed in under a week's time. Last week's puzzle, for instance - "Finger Tips" - went from theme brainstorming to completed grid on the previous Monday, completed clues on Tuesday, completed edited version on Thursday, and emailed out on Saturday. Had I not had the weekly assignment of writing a puzzle, this puzzle may not have ever existed.

While the maxim "necessity is the mother of invention" certainly applies, I will be the first to admit there's been a few rush jobs too, and the main point is that the pursuit of themes has become overly stressful, and it's one of the main reasons that the service will be ending. Another reason for the shutdown is that I'm not able to control all aspects of the service, including maintaining a consistent delivery schedule of the puzzles. It's been very frustrating working with the Aries Xword business manager getting the puzzles emailed on a consistent schedule week in and week out. Lately the puzzles have been sent in the late afternoons or early evenings, depending on your timezone - that's not ideal, and if it were up to me, puzzles would be released in the mornings at a consistent time on a weekly basis. With Aries Freestyle, I'll have full control over this, so the release schedule will be much more consistent.

What's Aries Freestyle, you ask? To use another cliche, when one door closes, another opens, and I'm very excited to get my hands dirty with this new service in 2018. With Aries Freestyle, I hope to explore some different stagger-stack layouts and other themeless formats. I hope that the discipline of writing a regular freestyle will push me in the same way that Aries Xword seriously helped me improve my themed puzzle skills. I can't wait to get started.

Perhaps the best way to encapsulate the four-year project is with a "greatest hits" book, and thanks to Peter Gordon and Sterling Publishing, such a book will be published in 2018. The book is called Maverick Crosswords, and it features 72 previously-published Aries Xword puzzles hand-picked by yours truly. The 72 puzzles includes examples from all four years and has an equal split of Easier, Medium, and Harder-difficulty puzzles. It looks like the book won't be officially released until June, but you can pre-order it now at Amazon or Barnes & Noble. Going through the book is illustrative of the progression of my career, and it's a unique perspective to edit puzzles that you wrote at a different point in your life. As usual, Peter has contributed his deft hand in editing the collection. If you missed out on the action the first time around, or want to relive the best of Aries Xword in book form, be sure to pick up a copy!

Thanks again to all Aries Xword subscribers. I hope the puzzles over the last four years have been as enjoyable to solve as they have been to write.


I'm very happy to announce the release of The Stagger Sessions, a collection of twenty original themeless crosswords I wrote in the spring of 2017. All puzzles feature a staggered central stack, oriented either vertically or horizontally in each grid.

I'm conceptualizing this project as a "crossword EP," and thus the packaging of The Stagger Sessions is more reminiscent of an album of music than a standard crossword book.

The Stagger Sessions is available for purchase for $10 $8 for the full EP, which includes the 30-page PDF including liner notes, the puzzles, and their solutions, as well as .puz versions of all the puzzles. 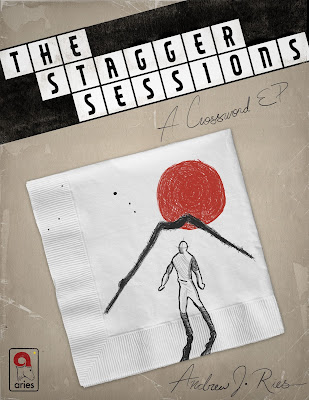 In 2017, solutions are included with the puzzle email, instead of being posted on the website. I'll continue to update the site, and possibly will post a write-up or such down the road, but on a very infrequent basis. If you have questions or comments about the puzzles, by all means drop me an email.