Back to the good ol' cryptic this week, a full 15x15 size in fact! The first entries in the puzzle were 1-Across and 22-Across. I found the full 15x size a fresh challenge to construct - there's room for more entries, and longer entries, and generally the longer the entry the more difficult it is to clue. Hope you enjoy!

Revisiting my "crosswordese movies" bit from a while back, I did get around to seeing D.C. Cab. If my goal of watching these movies was to convince myself never to use these movies again in puzzles, I've so far succeeded with D.C. Cab. What an odd film...first off, crosswords would have it that this is a Mr. T film; of the 56 hits DCCAB gets in Matt Ginsberg's Clue Database, 41 of them include some reference to Mr. T. In fact, Mr. T is a minor character in the movie - even among an ensemble comedy cast, he rarely stands out (well, aside from those pants): 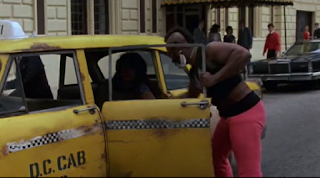 There's one scene late in the film where Mr. T gets to do the "let's band together and fight and win this thing!" pep talk to the rest of our scrappy, underdog gang of misfit cab drivers. It's basically three minutes of Patton sandwiched in the middle of a MadTV episode, and it's Mr. T's time to shine in the movie, but aside from that he's barely a character. But again, those pants.... 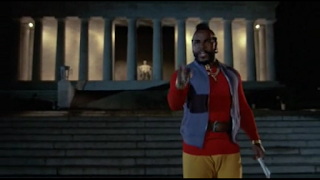 If D.C. Cab is any one actor's movie, it's probably Adam Baldwin, who plays the lovable protagonist, Albert Hockenberry, who enters the zany world of the D.C. Cab Company in hopes of hitting the big-time as a cabbie in Washington, D.C. Or maybe it's a Max Gail movie; after all, he gets top billing in the end credits. Gail's performance as the owner of the cab company might be the movie's bright spot. Perhaps the main problem with D.C. Cab is that it's nobody's movie, a multi-storylined workplace sitcom written and directed by Joel Schumacher, whose similarly-plotted Car Wash script from a decade earlier surely served as a template for this movie. I'm not the biggest Schumacher fan, and this is the part of his career where frantic comedy seemed to be his niche. His previous film, The Incredible Shrinking Woman, was perhaps the cokiest of all the coky comedies of 1981, a cinematic disaster of hectic direction and shabby writing. D.C. Cab is similarly cocainey in its aesthetic, serving more as a static sitcom than a three-act film - the third act dilemma arises from nowhere and is hastily resolved. At least the gorilla on the loose in the third act of Shrinking Woman was nowhere to be found in this third act.

In the end D.C. Cab was watchable and it got some legit laughs from me, which I can't say about many comedies from this period. But for the most part, I was laughing at the movie rather than with it, and the high quotient of '80s cheese - the hacky comedians the populate the cast (Bill Maher and Paul Rodriguez included), the Giorgio Moroder music, the pants - disqualifies it as any sort of relevant film today. It's a pop culture relic, and a rather forgettable one. But it has its moments, and it has its pants. 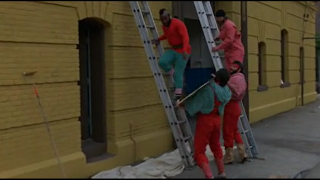 Email ThisBlogThis!Share to TwitterShare to FacebookShare to Pinterest
Labels: Cryptic

Welcome back! As I mentioned last time, I've got a Puns & Anagrams puzzle today. See below for the links; in the PUZ version, there is one clue (36-Across) that I could only use the Notepad to replicate, so be sure to click on the Notepad for that clue.

Puns & Anagrams is a format that is related to the cryptic, but stands alone and does its own thing. Will Shortz wrote a column explaining the basics of P&As a few years ago, and I can't put it much better than Will, but I'll try to sum up the most important concepts of the P&A that I keep in mind as I write these.

P&As differ from cryptics in two key ways. First, unlike cryptic clues which may read more like complete sentences, P&A clues are structured like a standard crossword clue, no matter how much wackiness the clue may entail. There is an imperative function of a standard crossword clue that the P&A must replicate; cryptic clues often lack this function. A fun characteristic of a P&A is that it can incorporate the familiar notations often seen at the ends of crossword clues (Abbr., e.g., et al., etc., cross-references, and so forth) into the wordplay itself. Keeping in mind that the clues must retain the structure of standard crossword clues, I like to think of a P&A like a parody crossword, in a similar vein to a Something Different puzzle (or "Cuckoo Crossword"), except that in a P&A, the grid is normal.

The second key difference is the grid. Since every letter in a P&A is checked twice, there's a lot more "falling into" answers than there would be in a block cryptic puzzle. Cryptics are much more rigid in their cluing structure because the solver inherently relies on each clue, since half of the squares in the grid are unchecked. In a P&A, it's possible to get most or all of an answer filled in by solving its crossing entries; hence, each P&A clue isn't required to give a straight definition, nor are anagram indicators required. This "looseness" in cluing rules is in place because the solver can rely on crossings much more so than in a block cryptic.

Hope you enjoy this change of pace - back to Cryptic #10 in two weeks!

Happy solving!
Posted by Andrew J. Ries at 6:00 AM No comments: