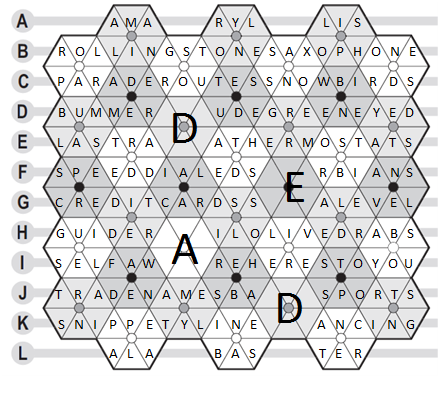 In this meta, we were looking for a "1970s song." The instructions stated that four blooms had something wrong, and another hint at getting the song was contained in one of the rows.

The four troublesome blooms needed only one letter in them, to be shared by the parallel rows. So for instance, D1's answer was BUMMER(D)UDE and LA STRA(D)A, both sharing the D in parentheses.

Those blooms, read from top to bottom and left to right, spell out DEAD. And if you take B1 and the S of B2, you see the ROLLINGSTONES hanging out in Row B.

Seeing that this is a garden after all (with AMARYLLIS confirming that in Row A), what could possibly be the answer? Fittingly, it's DEAD FLOWERS, a country-inspired song off the Rolling Stones' seminal 1971 album Sticky Fingers. It's been oft-covered since then, with probably my favorite version being Townes Van Zandt's, which was featured at the end of The Big Lebowski.

Norm Hurlbut uses a gardening pun to convey his satisfaction with the puzzle:

I think you have broken new ground with this one.

Fellow Minnesotan John Wilson found the meta to be a tad ill-timed:

Say it ain't so - can't we get just a couple more frost-free weeks here in Minnesota before the growing season is going, going, gone?

Eric LaVasseur explains his leg-up for getting the meta:

I play keyboards in a band, and this is one of the cover songs that's in our rotation.

Pete Muller (who creates his own music-related meta crosswords) channels his inner Mick Jagger in submitting his answer:

I won't forget to put roses on your grave.

Those are the closing lyrics to "Dead Flowers."

A fair amount of solvers mentioned they weren't familiar with the song, but were able to come across the correct answer. While it's no doubt disappointing when solving a meta puzzle that you need external resources to come up with the answer (it's much more satisfying if you reach the "a-ha" yourself), I was pleased that "Dead Flowers" had enough of a "click" factor once googling "Rolling Stones dead". No doubt the floral aspect of the answer was enough for these solvers to be confident in their answer. So I do feel bad that "Dead Flowers" is a bit too much of a deep cut (especially when considering the Stones' vast oeuvre) for universal recognition, but as I mentioned I was satisfied that the meta was solvable even for those who aren't familiar with the song.

87 solvers submitted the correct answers, along with 9 incorrect answers. Using a random number generator, the winners of a 2015 subscription and a copy of my upcoming Creepy Crosswords are: Daniel Streit and Matthew Mitchell. Congratulations to both, and thanks again for everyone for playing!